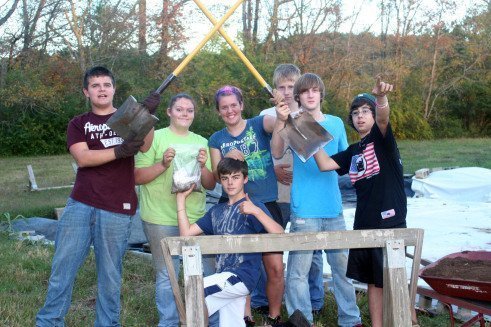 Imagine that the site of the Lost Colony of Roanoke or even Jamestown were discovered in your backyard….

Wouldn’t you want to get involved and learn everything you could about the people who walked on your land close to 500 years ago?

Would you want to get your hands in the dirt and touch artifacts that once belonged to a native family or a Spanish soldier?

In 2013, after 27 years of excavations, archaeologists discovered the Spanish Fort San Juan (1567), the first inland European settlement in the United States, at the site of the native town of Joara.

Our organization was founded in 2008 to engage the community in archaeological efforts to uncover Burke County’s forgotten past. Our name pays homage to the native village of Joara that was once a rich center of Mississippian-period life.

The Berry Site, named after the family who has so generously allowed excavations and research to happen on their property for the last three decades, attracts history enthusiasts from across the world. EJF is honored to partner with the research team, the Berry family, and many community partners who believe that the encounter between Juan Pardo and the natives of Joara forever changed the trajectory of our nation’s history.

EJF exists for this very reason. We are dedicated to engaging children and adults alike in archaeology and cultural heritage based programs in North Carolina.

The Exploring Joara Foundation, Inc. engages the public in archaeology in the Carolinas, and emphasizes the discovery of the Native American town of Joara and Fort San Juan, the first inland European settlement in the United States.

Donate to the Exploring Joara Foundation

Members are the backbone of the Exploring Joara Foundation, and enjoy many great perks, such as: